While my time in Belgium was little more than an additional passport stamp, I learned one thing that made my time worthwhile…

Between digging out my French for haphazard use to waltzing the cobblestone roads, I’ve never tried more sincerely to keep my eyes open even as serious jet-lag cooed them closed.

And while only a short layover on my way to Rwanda, Belgium’s Victorian architecture and waves of tourism perfectly juxtaposed the following five weeks which were spent rooming with geckos, eating fried plantains and riding with 20 other souls in 14-passenger vans. While I may still take the plantains over croque-monsieur, Brussels certainly had a charm of its own.

One final note–Belgium colonized Rwanda, further complicating my perception of those sleepy hours. It was eerie to imagine the dark, imperialist decisions of King Leopold II could belong to such a lively and care-free atmosphere.

But maybe it shouldn’t be.

“[The greatest evil] is conceived and ordered… in clean, carpeted, warmed, and well-lighted offices, by quiet men with white collars and cut fingernails and smooth-shaven cheeks who do not need to raise their voice.” – C.S. Lewis, The Screwtape Letters 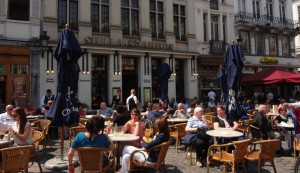